It’s October and the baseball playoffs are going full steam. We had a “ball park” dinner last night – peanuts, Cracker Jacks, and hot dogs. Yum… it was almost like being right in the stadium as we watched the game on TV in Florida. 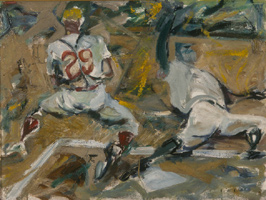 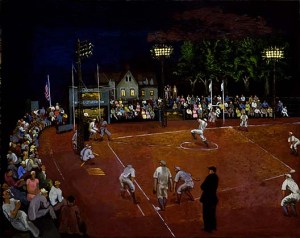 Did you know that major league baseball did not play its first night game until 1935?   League play and exhibition games were played at night games beginning in 1930. Baseball games were the rallying cry for community get-togethers.   Morris Kantor captures this excitement in Baseball at Night, his 1934 depiction of a nighttime baseball game.

Check out this short but powerful Metropolitan Museum of Art post on baseball and art. Really? Yes, baseball is a popular topic with artists, too. http://www.metmuseum.org/research/libraries-and-study-centers/in-circulation/2015/baseball

Earnest Thayer’s poem, “Casey at the Bat” captures the excitement of the game and the hoped for thrill of winning. The fictional team of Mudville is behind, but with two runners on, hopes of winning the game rest on “Casey.” The building drama of what will happen is like breathlessly waiting for the top star to hit a home run to win the game. You might read the poem through for understanding before you try the dramatic version. Test different ways of expressing each line, and see what you like best. Alternate lines so that everyone has a chance to read. Think of this as the team approach to poetry!

“Take Me Out to the Ballgame” is like the “national anthem” of baseball. Try singing this Tin Pan Alley song from 1908 during the famous seventh inning stretch.

Yep… baseball is an American passion and the arts help us to savor the moments. We hope that you’ll enjoy some baseball through the ARTS!